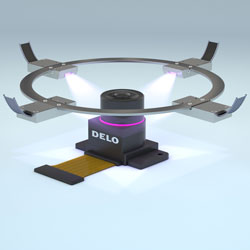 DELO Industrial Adhesives has developed a particularly space-saving UV lamp for adhesive curing. The powerful DELOLUX 503 is created for industrial applications needing small surfaces to be bonded within seconds in serial production lines, such as for bonding cameras used in autonomous cars.

When developing the new lamp, special attention was given to minimum installation dimensions. The lamp also features light directed diagonally downwards, so it does not need to be installed at level with the components to be bonded.

At a typical working distance of 15mm, the curing lamp irradiates an area of 18mm x 6mm. This high-performance spot light source is offered in two versions. One model, featuring a wavelength of 365nm and a nominal intensity of more than 1000mW/cm2, has been optimised for fast fixation in less than a second. The second version with a wavelength of 400nm and an intensity of more than 1600mW/cm2 has been developed with a focus on optimised deep curing of the adhesive and better penetration of hardly translucent plastics.